Get fit after all that feasting
Tips

Surprisingly, they’re not that difficult. In fact, you might already have these pieces in your closet 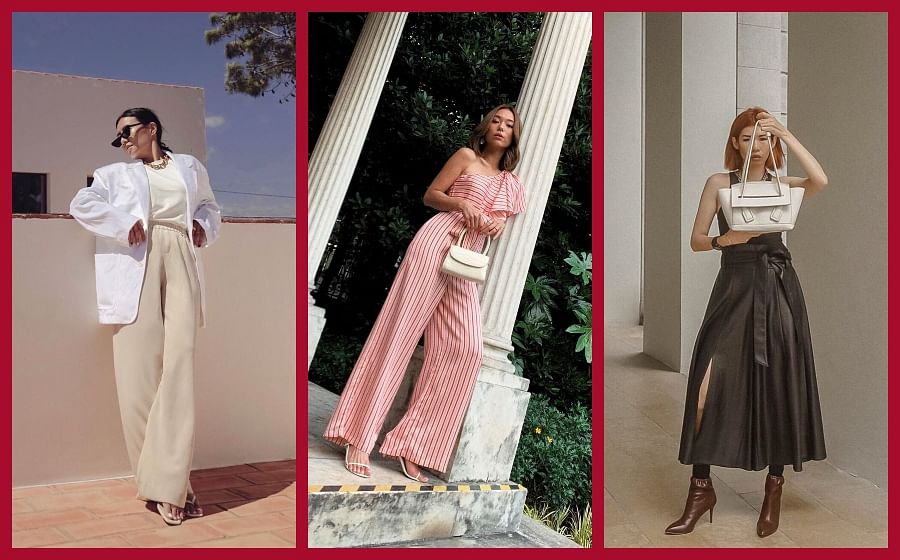 The Instagram-influencer bubble is bursting. There, we said it. Because in today’s world where the fashion and styles previously reserved for the 1% (you know, rich kids?) have now become democratic thanks to the high-street, it’s easy to dress like everybody and anybody you admire or know. That could either be a good thing (for those who want to start getting into fashion) or a bad thing (we’re calling it, fashion-sheep mentality).

Which influencers should you then follow for true style? We’re thinking of these 10 ladies who’ve been consistent in their style – some of them do #OldCeline-esque minimalism, some are into ‘90s style (and for good reasons) and some make the white-tee + jeans combo look incredibly appealing. Click on for more.

Layering in this heatwave? Not a problem for this tropical body ✨

If you’re thinking that tailoring means razor-sharp um, tailoring, you might want to look at Savina’s outfit and think again. But you don’t have to think of which brands you need to purchase these boxy separates though – chances are you might already own a pair of these high-waisted palazzo pants but for the blazer, just nick them off your boyfriend. Modernise them too with thong sandals, no stuffy loafers please.

Happy Pride fam May we continue to celebrate being our true selves and continue fighting for equal rights ️‍ The lgbtq+ community has "taught me tolerance, compassion and humility. It has shown me the limitless possibilities of living. It has given me people whose passion and kindness and sensitivity have provided a constant source of strength." Thank you for making the world a much better, happier, more colourful and sassier place to live in. I love yall so much ❤️ ️‍ #worldpride2019 #pinkdotsg #loveislove #pride #pridemonth #lovewins #lovealwayswins

The fluorescent pink ruched satin dress, the giant gold graphic earrings and the severely slicked back hair – Camira took a time warp to the ‘80s (the good part fyi) and it’s not hard to see why when fashion designers such as Michael Kors or Saint Laurent are doing it. In an era where club girls love wearing bandage dresses or streetwear, you’re going to want to be that chick who shows them up.

It’s easy to be awed by everything that Yoyo Cao wears because damn, you’d be hard pressed to disagree that this girl seriously has style. But we’re going to zoom in to something she’s wearing that’s less expected – her jewellery. It’s graphic, minimal in a very ‘90s fashion, and because there’re so many great jewellery designs from the high street to the high end, you’re able to get them at any budget.

Nicole Wong proves that you don’t have to do the old glitz-and-glam shebang when the invitation card to a party states “evening glam”. The sleeveless belted dress with a subtle sexy thigh slit modernises the evening dress and the sexy quotient is upped when you pair it with high-heeled ankle boots. But the piece de resistance? A roomy but mini tote because you’re going to want to be prepared (aka your deodorant + cards + makeup is going to fit in it).

There’s only one thing that can make my soul complete, and that is Love.. although I’m not at all adverse to shiny things! Patiently waiting to be surprised with the stunning new Tiffany True Collection as well as their new T setting! (*Hint hint @louiescp! ) In celebration, Tiffany’s blue benches have taken over Singapore! I got to paint the town blue by visiting the first bench along Orchard Road! More bench locations to be revealed on Tiffany & Co’s event page daily! #BelieveInLove #TiffanySingapore

ALSO READ: 5 FASHION INFLUENCERS WE LOVE AND HOW TO GET THEIR STYLE

Happy 45th anniversary @female_singapore !!❤️ Thank you for having us to bigger and better✨ #whatthefemale#femalesingapore

While the printed two-piece can seriously veer into Queen of England territory, Iman Fandi proves that there’s a youthful and fun way to wear it – an athletic cropped top, layered gold necklaces and a print-clashing cross body bag. You also might want to consider how bang for your buck the two-piece is – you can wear it together as an outfit but we’d prefer to separate and mix them with other ones.

It has ‘90s appeal (Kate Moss was constantly seen wearing one in that era), flatters every body shape and size and if you’re like Guan Min, you’d like them with a print and ruched at the bottom for downtown girl appeal. You can wear it like her with a straw boater hat and sandals for day but when it comes to night, you can vamp it up with high heels and an oversized blazer. Now that’s true day-to-night style.

You see a bad hair day fix but we see a head wrap that elevates everything from a simple white tee + jeans combo to the most elegant of evening dresses. The latter is probably why Peggy Chang likes then so much – she can be seen wearing them even on off-days. But if you think that putting on jewellery or accessories is a quicker fix, think about the turban instead – it takes less than 30 seconds to tie.

hi friends, i’m still without a phone / but have no intention of repairing my phone (pls @apple dude lower your screen repair costs) / but have no access to my email which is real fun but ‍♀️ (pls bro @microsoft u gotta make it easier for me to recover my account) / is mercury in retrograde???? TL;DR - DM me if you need to contact me

Ashley Bei’s outfits are what we call palate cleansers – in a digital world where everybody is vying to “out-fashion” the next, it’s pleasing to see someone dress so simply. The asymmetrical cardigan, white slip tank, cropped jeans, sandals and it-bag are pieces you already might own so if there’s an influencer you can aspire to, it’s definitely Ashley.

Evening events call for off-shoulder jumpsuits like this @Mango #MangoGirls

It’s the weekend and after a week of considering what’s office appropriate, you might be tempted to slip into the bedrock of every Singaporeans’ weekend wear – the denim shorts and thong slippers. But Andrea Chong proves that acing the elevated weekend wear doesn’t require bells and whistles – all you need to do is to slip on an off-shoulder jumpsuit and pair it with strappy sandals. There, you’re done in less than 10 minutes.