Despite being in a long-distance relationship for 2 years, the couple has kept things strong 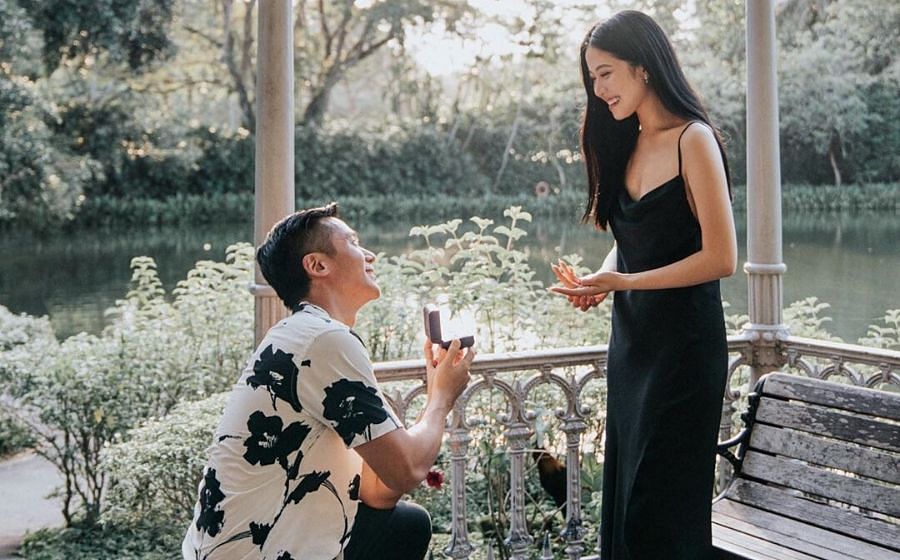 People say that the length of your relationship isn't important when it comes to marriage, and local actor Joshua Tan proves so when he popped the question to his girlfriend, Zoen Tay, whom he has been dating for two years.

The 29-year-old actor proposed to the 22-year-old medical student and announced his engagement yesterday via Instagram. He wrote: "Thank you @tayzoen for an amazing 2 years together, even though it's tough being apart we make it work no matter what❤️ I love you, and I can't wait for our future together Thank you for saying YES to me ."

Zoen posted another photo from the engagement on her social media with the caption: "This is mad. You're mad. I'm mad. But there is always madness in love, and there is always reason in madness. I've never been more sure."

The pair went public with their relationship last year. They told Toggle that they had been discussing marriage for half a year now. He laughed, "I mean, she even sent me links of the ring that she wanted. I'm pretty sure that was a green light, right?"

Joshua decided to go on bended knee because it was their second anniversary-and also because she had to go back to Australia where she's attending medical school.

Since her course is a six-year course and she's going on to her fourth year, they probably won't be tying the knot anytime soon.

Zoen said in the same interview, "I haven't really thought about when we'll have our wedding ceremony. For now, we're just enjoying the process of being engaged. I think having it around the same time as my graduation will be nice." Nawww…

Read on to see some of the sweetest celebrity engagements of all time.

The couple, who are now parents to a baby boy, shared the story behind the proposal in a super sweet interview.

It happened in their cottage in Kensington Palace, and while they were “trying to roast a chicken”.

Prince Harry shared, “She didn’t even let me finish. She said, ‘Can I say yes? Can I say yes?’ and then there were hugs and I had the ring in my finger and I was like, ‘Can I — can I give you the ring?’ She goes, ‘Oh yes the ring.’”

The Chinese It couple may have broken up, but let’s be real: Li Chen’s proposal during Bing Bing’s 36th birthday bash was w-o-w.

The actor surprised Bing Bing and got down on bended knee to pop the question. Li Chen said after the proposal, “I’m a little incoherent, my heart rate is 180, you’re sitting there like it’s nothing, I’m nervous to death.”

For Koreans, marriage works a bit differently. If they’re serious about each other and are discussing marriage, they would meet their respective families before planning anything.

Hence, a proposal is not mandatory, although it’s now popular among younger couples. Tae Hee wasn’t proposed to until the day of her wedding.

She said, “I was proposed to on the day of my wedding. At the banquet reception, [Rain] serenaded me with ‘The Best Present’. That was his proposal.”

The royal couple might have had a royal wedding, but their proposal was simple: Prince William had gotten down on bended knee in a mountain lodge while the couple was having a vacation in Africa in 2010.

The prince had proposed with Princess Diana’s sapphire and diamond engagement ring. Seven years on, the couple is now expecting their third child.

Hyori had posted a video of the proposal, which showed her being surprised by her close friends when she came home.

Sang Soon had prepared a proposal video, before going down on his knee to ask her to marry him. In Hyori fashion, she coolly took the ring out of the box while saying yes.

The actor had surprised Hye Sun with a bonnet full of flowers while proposing to her and posted the video on Instagram.

In April last year, the couple had announced that they would be tying the knot on May 20. Jae Hyun prepared this proposal for Hye Sun just weeks before the actual wedding.

No one said the man has to do the proposing, and Pink proved this when she popped the question to motocross racer Carey Hart when he was racing.

The singer, who was assisting him in his race, had held up a board that read “Will You Marry Me?” when he was in his third lap. When he didn’t stop, she flipped the sign to read “Serious!”.

Carey abandoned the race, got off his bike, ran over and said “Yes”.

When news broke that Yong Joon and Soo Jin were getting married, many were taken by surprise.

The two had met after Soo Jin joined Keyeast in 2014 – the company Yong Joon is the owner of.

According to a Korean TV programme, the actor had planned to rent a wedding hall for the proposal, but faced difficulties due to the MERS scare. He then opted to pop the question in his home.

Yoga and Kiki had a very public proposal – the male singer had done it by posting his proposal on Weibo.

He wrote a lengthy post about cherishing their time together and ended with, “I’m not sure if everything will go smoothly. But I’m ready – ready to go on my knees, ready to speak to you, and hidden in my pocket is the ring I bought. Please marry me.”

An hour later, he posted an update to inform fans that she had said yes.

Considered one of the most enviable Korean couples, the two had met after working together in a drama, and got married two years after.

The actor had reportedly booked a restaurant next to Han River and decorated it with balloons. He then set off firecrackers to celebrate their 600th day anniversary, and then proposed to her.

Hannah had revealed details about the proposal during an interview. She said that she had a feeling what he was up to even before he proposed!

He had reportedly insisted to have dinner at a restaurant although she wanted a home-cooked meal.

She said she saw three men proposing to their respective girlfriends at the restaurant, and had a hunch that Jay would do the same. When he proposed, she burst into tears of happiness.