The Crazy Rich Asian actress, Nora Lum, wins a Golden Globe for Best Actress in Motion Picture (Comedy or Musical) category for her performance in The Farewell 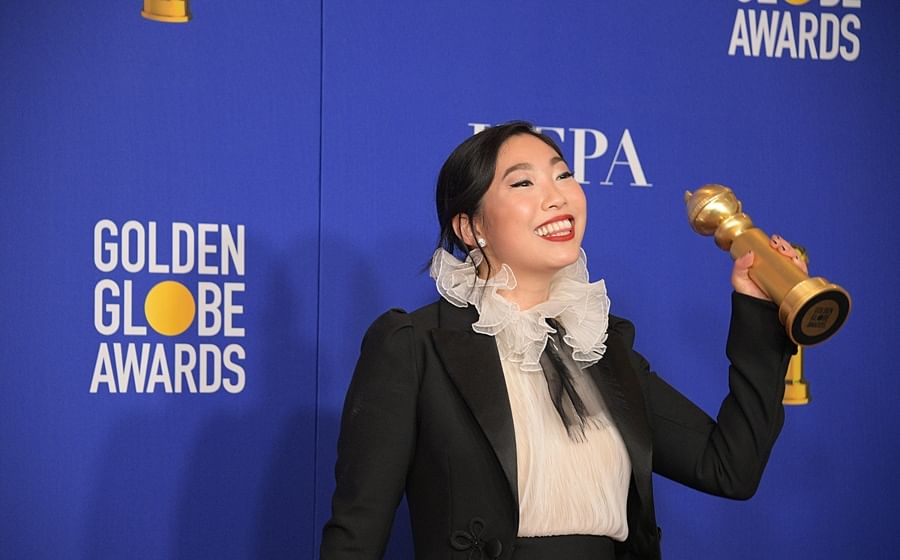 With the 77th Golden Globe Awards wrapped up just hours ago, the awards season is well underway. And while we always look forward to celebrities serving up jaw-dropping looks on the red carpet, another thing that gets us excited is the noteworthy, memorable moments that make the show a unique every year. Here are the best highlights you need to know from this year’s show.

1. When meat wasn’t on the menu

In light of the climate change issue, the Hollywood Foreign Press Association, who manages and gives out the Golden Globes, has decided to put out a plant-based meal at the pre-show dinner at The Beverly Hilton hotel.

Over a thousand guests were treated to a starter of chilled golden beet soup topped with shaved candy-striped beets and pistachios, a main of king oyster and wild mushroom risotto before finishing dinner with a vegan opera dome dessert.

Moreover, the show had taken steps to eliminate the use of single-use plastic and water bottles to raise awareness.

“If you win, come up, accept your little award, thank your agent and your God and f— off.” Host @rickygervais calls for no politics at the #GoldenGlobes https://t.co/tNUhIo4NNJ pic.twitter.com/2RmnuCh1QX

The polarising British comedian and five-time host of the Globes is not one to hold back. During his opening speech, the host of the evening called out the double-standards of fake "woke" celebrities who would work for companies who aren’t that great.

Gervais said: “If you do win an award tonight, don’t use it as a platform to make a political speech. You’re in no position to lecture the public about anything. You know nothing about the real world." Cue Tom Hanks’ meme-worthy reaction.

3. When Jason Momoa bared it all

Jason Momoa wearing a tank to the #GoldenGlobes is peak Jason Momoa. pic.twitter.com/2EbDU4FYm5

The Aquaman is no stranger to experimenting on the red carpet. Momoa and his wife Lisa Bonet slayed the red carpet in matching couple ensemble, the former wore a green velvet Tom Ford coat, Valentino pants, and Cartier pin and watch while the latter wore Fendi. It was later caught onscreen that Momoa had taken off the coat and watched the show in a black tank-top, showing off his strong, muscular arms. We ain’t complainin’.

4. When Queen Bey made a surprise appearance

Beyoncé is usually a no-show at these award ceremonies, with 2009 being her last appearance at the Globes.

However, the queen of pop decided to attend this year’s show while arriving fashionably late in a gold puffy-sleeved dress with husband Jay-Z. Beyoncé’s Spirit for The Lion King was nominated for the best original song but the title went to Rocketman’s (I’m Gonna) Love Me Again.

5. When celebrities called for political and social change

Celebrities have long used their acceptance speeches as platforms to raise awareness and call for change. This year’s Golden Globes was no different.

Michelle Williams’ powerful speech called for the support of abortion rights and the ability for women to choose whether to abort, while Russell Crowe, who had missed the ceremony due to the devastating fire in his native country Australia, called for more action against climate change (which was read out by presenter Jennifer Anniston).

Patricia Arquette, on the other hand, urged for more to cast their votes at the impending 2020 US elections.

6. When Awkwafina made history

Nora Lum, who goes by her stage name Awkwafina, first stole our hearts in Crazy Rich Asians as the hilarious sidekick Peik Lin. And now, with her role in Lulu Wang’s The Farewell, the actress wins a Golden Globe for Best Actress – Motion Picture Comedy or Musical, making her the first person of Asian descent to win the award.

Awkwafina dedicated the win to her family, especially to her father saying, “I told you I’d get a job.”

7. When Tom Hanks made everyone cry

There's no crying in baseball, but there is crying during acceptance speeches.

Tom Hanks receives the Cecil B. DeMille Award at The #GoldenGlobes. pic.twitter.com/gDBdZFabrU

Tom Hanks, the recipient of this year’s lifetime achievement award, the Cecil B. DeMille Award, gave a heartfelt acceptance speech that moved viewers.

Fighting back tears, Hanks thanked his wife Rita Wilson and five children for being his blessing before thanking colleagues that helped pave his career, including Meryl Streep and Denzel Washington.

8. When Parasite became the first Korean film to win at Golden Globes

In his thank you speech, the director said: “Once you overcome the one-inch tall barrier of subtitles, you will be introduced to so many more amazing films”.

With this nod, many speculate that Parasite might win again at the upcoming Oscars.

Best Performance by an Actress in a Motion Picture -- Drama

Best Performance by an Actor in a Motion Picture -- Drama

Dolemite Is My Name

Once Upon a Time in Hollywood

Leonardo DiCaprio, Once Upon a Time in Hollywood

Eddie Murphy, Dolemite Is My Name

Tom Hanks, A Beautiful Day in the Neighborhood

Brad Pitt, Once Upon a Time in Hollywood

Best Television Limited Series or Motion Picture made for Television

Quentin Tarantino, Once Upon a Time in Hollywood

Best Performance by an Actress in a Television Series -- Drama

Best Performance by an Actress in a Supporting Role in a Series, Limited Series or Motion Picture made for Television

"Into the Unknown," Frozen II - Music and Lyrics by Kristen Anderson-Lopez & Robert Lopez

How to Train Your Dragon: The Hidden World

Once Upon a Time in Hollywood - Quentin Tarantino

Best Performance by an Actor in a Television Series -- Drama

Portrait of a Lady on Fire

Christina Applegate, Dead to Me

Kirsten Dunst, On Becoming a God in Central Florida

Best Performance by an Actor in a Supporting Role in a Series, Limited Series or Motion Picture made for Television

Paul Rudd, Living With Yourself