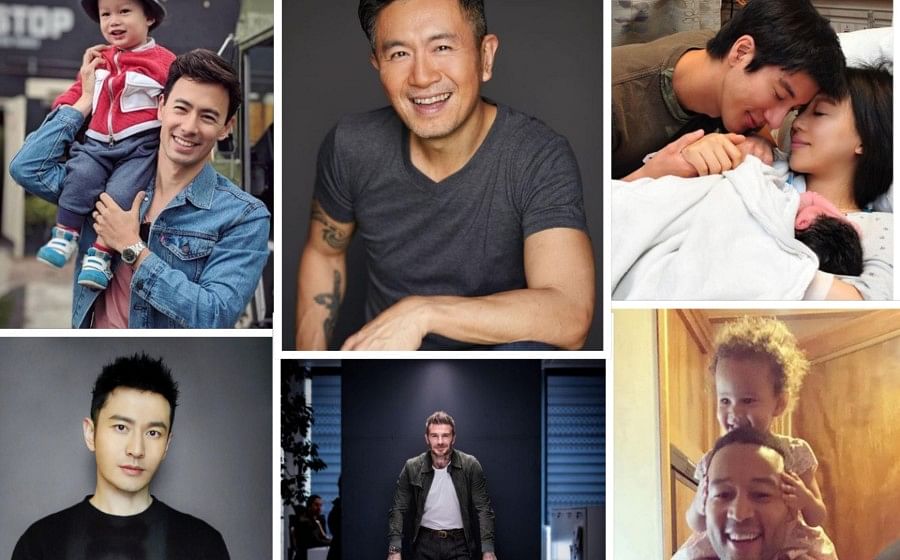 Father’s Day is only a few days away. It might be a crime to be good-looking, famous and rich all at once… but these celeb dads make it look legit, and of course, enviable. In honour of the dads celebrating Father’s Day all over the world, here are entertainment’s 20 finest specimens of fatherhood. Happy Father’s Day, everyone.

In THIS IS WHAT HAPPENS TO PRETTY GIRLS, Adrian Pang plays Lester Sitoh, an uber-masculine, tough talking kind of guy, who doesn't give two hoots about political correctness or pandering to the "strawberries" amongst us. He also hides a dark secret. Come find out what it is in this powerful and provocative #metoo play at the Drama Centre Theatre this May. Grab your tickets at SISTIC now!

One of the most respected thespians in Singapore, Adrian Pang’s rise to fame was on television with shows such as Portrait of Home (2005), Nanny Daddy (2008) and Code of Law (2011). He set up theatre company Pangdemonium with his wife, Tracie Pang née Howitt, in 2010, and the award-winning company has since been known for its fearless and provocative exploration of sometimes controversial topics.

Known for his rugged looks, charismatic and affable charm and his fit physique, Adrian is a father of two, Zack and Xander, with the latter starring in the play Late Company with him early this year. Adrian recently wrapped up This Is What Happens To Pretty Girls, a play that talks about sexual assault and the #MeToo movement. Can we love him any more?

George Young is blessed with dashing good looks and enviable bushy brows due to his mixed heritage (Chinese and Greek). Happily married to Taiwanese author-host Janet Hsieh, the two have an adorable son named Egan, who gets regular features on the couples’ Instagram accounts. But did you know, the actor gave up practising law in London to pursue his love for acting? In 2018, George released a short film, titled Home, that he wrote, direct and co-starred in with wife Janet.

Whether you know him as Green Lantern (2011), Deadpool (2016) or Detective Pikachu in Pokémon Detective Pikachu (2019), Ryan Reynolds is undoubtedly one of the hottest — have you seen that well-honed physique? — and most popular dads today. Besides being married to the gorgeous Blake Lively, whom he often gushes lovingly about (and teases unabashedly) during interviews and on red carpets, the pair are also expecting their third child (they already have two daughters) together.

Most of all, we love Ryan for his comedic timing and his penchant for hilarious tweets about the “joys” of fatherhood. One particular gem: “Being a father is the single greatest feeling on earth. Not including those wonderful years I spent without a child, of course.”

要練成怎樣老婆才會注意我？@jl.leilei how much more do I have to workout for Jinglei to take notice?

With a career that spans almost 30 years, Chinese-American star Wang Leehom is one of the biggest names in Mandopop, with multiple Golden Melody awards and chart-topping hits. Singing is not all there is to Leehom though, he’s an avid environmentalist and has also starred in over 20 films to date.

Leehom and his wife Lee Jinglei, who’s not in the entertainment industry, have three kids — two daughters and a son — but he still manages to keep a trim figure, as seen in this Instagram photo here where he hilariously jokes about how his wife ignores him despite his workout efforts. We also hear rumours that his directorial debut, romcom Love in Disguise (2010), actually portrays the love story between him and Jinglei. How sweet is that?