From Dwayne Johnson to Chris Hemsworth, these celebrity dads may be some of the sexiest men alive but we totally appreciate how they serve double duty as doting fathers 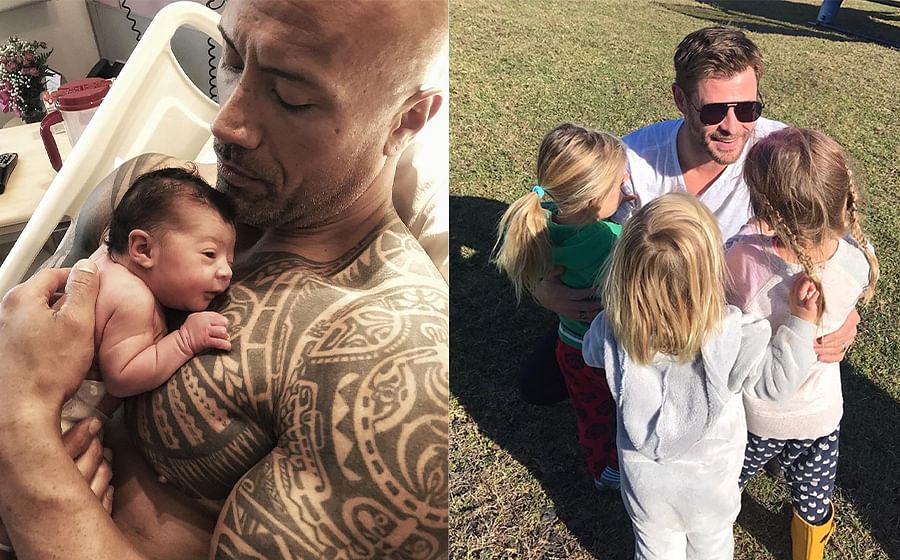 Father’s Day is only a few days away! It might be a crime to be good-looking, famous and rich… but these celeb dads make it look legit and possible. In honour of the dads celebrating Father’s Day all over the world, here are entertainment’s 12 finest specimens of fatherhood.

John Legend is the cutest of dads, especially with the constant online roasting from wife Chrissy Teigen. He is the epitome of an Instagram dad – their daughter Luna has been constantly stealing the spotlight on John’s Instagram and was even featured in his MV for “Love Me Now”.

South Korean footballer Lee Dong Gook is no stranger if you watch KBS’ The Return Of Superman. Father of five adorable children, he is both the man on the field and at home.

Liam Payne and Cheryl Cole welcomed their baby boy Bear last March. Recently, Cheryl revealed that Liam became the cook of the house after she gave birth so that she could get proper rest.

Rain became a dad for the first time last October with actress Kim Tae Hee and though we haven’t gotten a full picture of his princess daughter as he keeps his life very private, we’re sure that she will grow up well under the love of her parents!

The Maroon 5 frontman and his wife Behati Prinsloo are now parents to two beautiful daughters, having welcomed their second one Gio Grace earlier this year.

Here, we have Adam and Dusty Rose out on a play date. Goals!

David Beckham needs no introduction. No list of hot celeb dads would be completed without the joy that is David Beckham.

A devoted Instagram dad, his feed is filled with streams of birthday dedications, family outings and pictures with his kids.

Ricky Kim is undoubtedly an eye-candy with his chiseled abs and good looks, despite being a father to three kids.

Dwayne Johnson, AKA “The Rock,” is one of the beefiest, hunkiest celeb, but at home, he goes by another title: Dad.

Here’s a picture of him and his newborn daughter, Tiana Gia.

Aw, matching father daughter clothes! It’s known that Jay Chou has a habit of splurging on his family, wanting only the best for them – including enrolling his daughter in a $32K pre-school.

Chris Hemsworth may be best known for his role as Thor, but off-screen his most important role is being a father to his three children, India Rose, Sasha and Tristan.

His wife Elsa Pataky loves posting photos of Chris with their kids. Here, we see that Chris is quite the father bear and a human pillow with his little ones.

The Superman of the supermen. For those who used to watch the world’s most-loved triplets on KBS’ The Return of Superman, we all know that Song Il Kook is amazing at being a dad (to three cheeky sons) and also incredible at working out and keeping his physique toned.

Let’s be real, he completed a triathlon with his sons — he’s definitely something.

You would probably find it hard to guess Allan Wu‘s age by looking at his ripped built, but he’s actually 46 years old.

The US-born actor, host and VJ is a fitness junkie and devoted father to his two children.

Currently based in Beijing, Qi Yu Wu spends a fair amount of time away from his wife and children but still does his best to be a good father and husband.

You can tell how much he loves them by looking at the candid pictures he takes of his wife and children.

ALSO READ: 8 SWEETEST PHOTOS ON INSTAGRAM OF CELEBRITY FATHERS TIRED OUT AFTER LOOKING AFTER THEIR KIDS